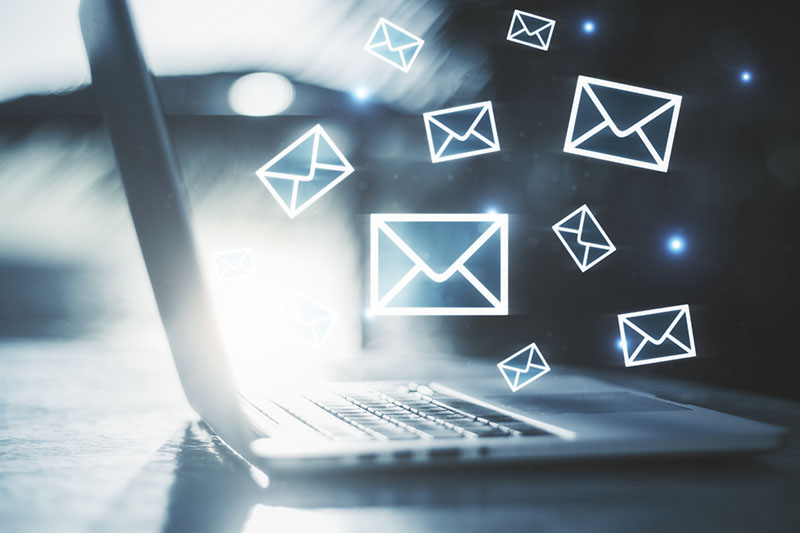 Email threads represent a group of emails all originating from the same email. These email thread groupings are convenient constructs for which eDiscovery tools and reviewers can logically define a conversation. For the purpose of understanding email threads, think of these conversations as branches. Emails will often branch off in many directions as senders cc, bcc or forward the email to different recipients.

Both Outlook and Gmail have built-in functionality to view threads as a conversation. Here is an example of an email thread in outlook using the “show as conversation option”.

While this interface may be a good way to organize cluttered threads, this is a misleading way to view the thread as a whole. The interface forces the thread to appear as a linear, like a back to back to back conversation. This is not the reality of how most threads behave. As a document reviewer, your job is to understand how threads can branch in all directions. Attention to detail can reveal important context such as what information was discussed, what documents were attached, and who was brought in or left out at each point in the thread. 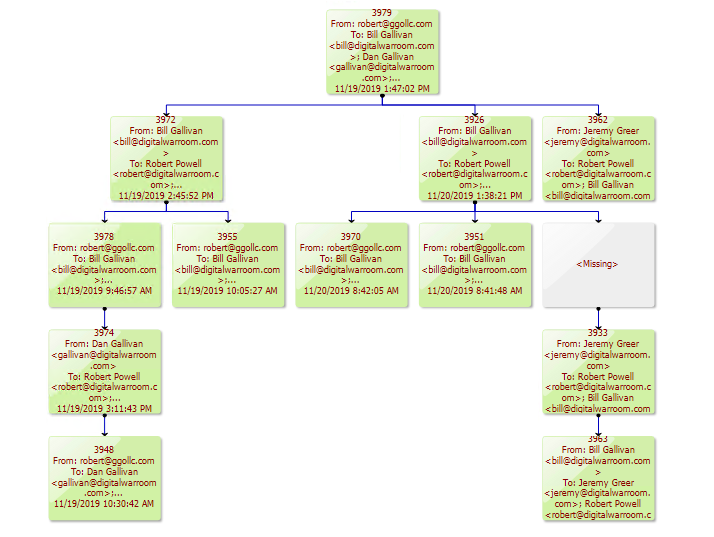 Each thread, whether linear or branching, tells a story. The story could be useful, or it could be noise such as: “pick me up some bread from the store”. When one single email in a thread is responsive, that’s usually a strong indicator that you should review the full thread. This is when the Digital WarRoom email thread visualizer tool becomes increasingly useful, as you could uncover more information and context by understanding the thread in its entirety. The email thread visualizer displays a visual rendition of how emails in the thread are connected.

The email thread visualizer will help you answer the question: what information is available to me and how is it all related? Email PSTs can be monstrous in size. More custodians and more data mean high review burden. Understandably, many review teams try to find ways to reduce that burden, especially in larger matters.

A common strategy to reduce review burden is for legal teams to only review the longest thread on each email chain.

What Is A “Longest Thread”?

In responding to an email thread, email applications tend to automatically append a log of the entire visible thread thus far as part of the email. It could be hypothesized that the “final” email in the thread (AKA “longest thread”) will contain most of the entire thread logged within that single email.

Here is an example: 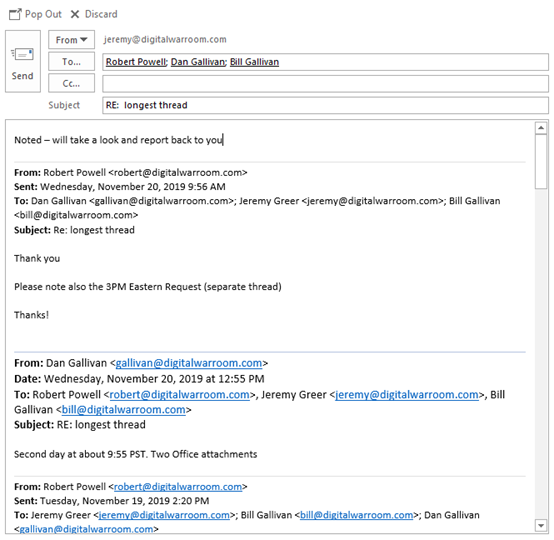 As a matter of policy, some firms choose to review only this one file (the longest thread) as an approximate representation of the entire thread. This means that they do not host or present subordinate thread segments for document review.

For example, assume the following simple conversation with some branches. Each box represents a separate message. This diagram shows 3 unique pathways or “mini threads” (ABDEF, ACG, and ACH). Essentially, one large, branching email thread can have many “threads” layered inside of it. Under the longest thread policy, this example would require the tool to capture multiple “longest threads” in order to ensure that the entire thread can be reviewed. A single longest thread alone can only track a linear, back to back conversation. To have all the context, you will need to review branching emails, which here comes out to three longest threads.

Body content from individual emails is not guaranteed to be preserved in the longest thread. Although forwarded, many users still delete all or portions of the old body text when forwarding. This means the longest element in the thread may not contain the text of all previous messages on that branch.

The more emails in the thread you have available, the more likely the tool will be able to identify emails that are missing. Reviewers need to be made aware of missing emails to ensure that email deduplication and the longest thread policy is safe for this particular thread. If the missing content goes undetected, this will result in loss of context for the attorneys.

In the diagram, assume we chose not to collect from certain custodians and there are emails missing from the thread (shown in grey). The reviewer would be forced to rely solely on message F to provide information on missing emails D and E. Depending on the level of responsiveness of the conversation, you may consider altering your longest thread policy to recover lost replies. If certain emails were all together not collected as is the case here, consider going back to collect from more custodians to ensure the thread has complete information.

The longest thread policy would determine that F is an approximate representation of the thread which includes emails A, B, D, and E. There are some inherent issues with that as we mentioned. However, let’s now also consider if message B had an attachment.

Attachments are the main problem relating to the longest thread. Typically email applications do not re-attach all previous attachments upon reply. This means that there could be crucial attachments that existed at different points throughout the thread. If your review team used only the longest thread policy, they would not be made aware of attachments to earlier emails. Producing the longest thread only without attention to this detail will almost certainly result in the suppression of data and failing to produce all potentially relevant documents in the thread.

Suppose the responsive date range was determined to be 2014-2016 and the legal team collected a set of highly responsive email threads which end in 2017. By reviewing only longest thread while implementing this date range as a policy, all emails coming before the longest thread will be deduped, while the final email in the chain which occurred in 2017 is in danger of being cut from review due to not meeting the 2014 – 2016 responsive date range. Therefore, the entire thread would be removed from review despite being highly responsive.

Reviewing only the longest thread could lead to a lack of review or disclosure.

- Privilege related decisions made using only the longest thread could lead to over-assertion of privilege.

Long threads may end with a lawyer being added to review the proposal, concept, idea or weighing in with legal advice on the discussion. Withholding a long thread based on privilege is usually incorrect (disallowed) if for instance 80 % of the thread did not include the attorney’s advice or work product. Those portions of the thread not subject to the rules of privilege should be disclosed to the requesting party.

What Longest Thread Options Are Available Within The Tool?

Digital WarRoom software originally had a filtering option called “Longest Thread”. This filter returned all “longest threads” in the database based on a true longest thread policy. This policy did not account for attachments, missing emails or replies. During that time, we received reports from some customers who made mistakes and did not produce enough information related to email threads.

2) Keep any intermediate email if it has an attachment

3) Warn the user if there are any missing emails

Most proper (Available as consulting-only)

4) Check that any existing intermediate email has all of its text included in longest thread and keep this email if not.

During your next training session with Digital WarRoom, we would be happy to go over ways to implement some of these strategies.

There are tools and functions within Digital WarRoom that you should be aware of when reviewing email threads. Regardless of your thread policy, take action to check if you are getting the full thread for each email chain. Take action to make sure the entire thread is available for you to view – especially when you find a responsive email. If you forget to take specific action to group threads together, you may end up reviewing fragmented versions of each thread.

Email threads are complicated and their importance can easily be overlooked by reviewers. Make sure to review the entire thread, and take measures to validate whether the entire thread is available to you. Decide on specific policies for reviewing email threads. If your policy is to only review the longest thread, consider the potential downfalls.

Reach out to us if you have specific requests relating to email threading. We may be able to come up with a unique solution to fit your needs.

Jeremy is the Marketing Director at Digital WarRoom. He believes in making eDiscovery accessible for everyone and creating publicly available educational content. You can find him exploring National Parks, watching Seattle sports, or sitting in the yellow booth on the Bainbridge Island ferry.