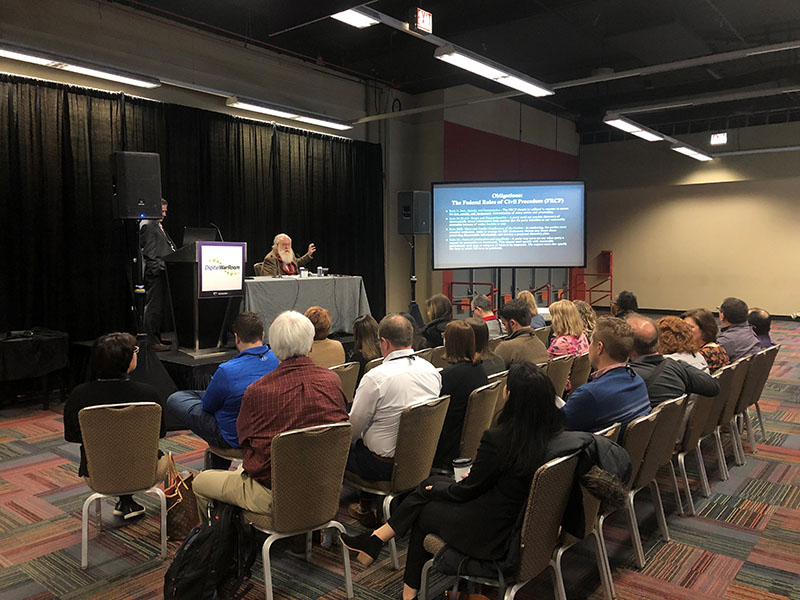 I was originally going to call this review of the Techshow “Why the ABA Techshow is like Mardi Gras” until Reid Trautz, the Director of the Practice and Professionalism Center at the American Immigration Lawyers Association And Chair of the Techshow in 2012) told me he overheard one attendee say this to another at an escalator at the show. Although I think the Mardi Gras comparison is a good one (crowds, excitement, good food among the reason) I find the Woodstock comparison even better. Here’s why.

The first centers around old technology versus new. Remember at the original Woodstock in 1969 we had well known musicians like Jimi Hendrix, The Who, Joan Baez, Richie Havens, Arlo Guthrie, Paul Butterfield and the Grateful Dead alongside stunning new groups such as Santana, CSNY and The Band.

At Tech Show, I was told by Nancy Duhon, the principal at Duhon Technology Solutions, told me she was seeing a number of new back office software tools, perhaps best exemplified by the Start-Up Alley. For the fourth consecutive year, legal news reporter Bob Ambrogi hosted a startup competition he first brought to the table that showcases 15 finalists facing off to give a 3-minute pitch about their legal startup. Brilliant.

Dave Clark, the IT Manager of the Utah State Bar, told me that he saw not only a great number of new products that we had never heard of before he also noted a trend that we've seen before which is people coming from outside of the legal space, taking their technology chops and applying them to our market. That's nothing new (cf, Andrew Sieja at Relativity and Andy Wilson at Logikcull) but this year, Techshow seemed to be overflowing with this new technology with new perspectives.

The weather was a similarity as well. At Woodstock it rained the proverbial totally uncomfortable 18 degrees at 9:00 AM. It didn’t get above 20 for several days and finally pushed into what seemed like the tropical 30’s on Saturday, the last day of the show.

But to me the most important similarity was the people themselves. The excitement, the camaraderie, the sense of finding something new and exciting had, in my opinion, been missing not just from this show but many other technical conferences for a number of years

I saw a similar attitude at the LegalTech show in New York last month but of course that's a completely different market. The approach at the ABA Techshow is clearly one of people working together working with each other and the speakers to find solutions, solve problems and make technology work for them.

The main difference in Chicago was the collegial approach that involved not just listening to speakers but talking to each other in workshop sessions and speaking with both experts and each other between the sessions and at social events. The availability of speakers to talk with attendees made the knowledge availability high even outside of the actual sessions.

By way of example, I spent 10 minutes speaking with Sharon Nelson of Sensei Enterprises on the subject of AI and learned as much in our 10-minute chat then I did in several formal sessions that I attended. That sort of approach simply doesn't fit with the competitive nature of the large firm environment at most other shows.

Roberta Tepper, Lawyer Assistance Programs Director for the State Bar of Arizona, Techshow Board member and co-chair for the 2021 event along with Allan Mackenzie, , was co-presenter on a workshop session discussing well-being for lawyers ( a topic that is long overdue from my perspective) and noted that we've gone from human beings to humans doing. A perfect way to phrase the tone of the entire conference.

Kudos to conference co-chairs Heidi Alexander, Deputy Director of Lawyers Concerned for Lawyers in Boston, where she helps manage organization operations and leads the Massachusetts Law Office Management Assistance Program (LOMAP) and Catherine Sander Reach, Director for the Center for Practice Management at the North Carolina Bar Association, They headlined a great show with great attendees and speakers, all helping each other to move the technology bar forward. I found the level of participation, enthusiasm and cooperation extremely high, something that of course we've talked about an awful lot in the ediscovery world and found lacking for several years now. The Techshow emphasis on solo and small firm attorneys at this show bodes well for the future of legal technology.