Ediscovery Evolution in the 21st Century 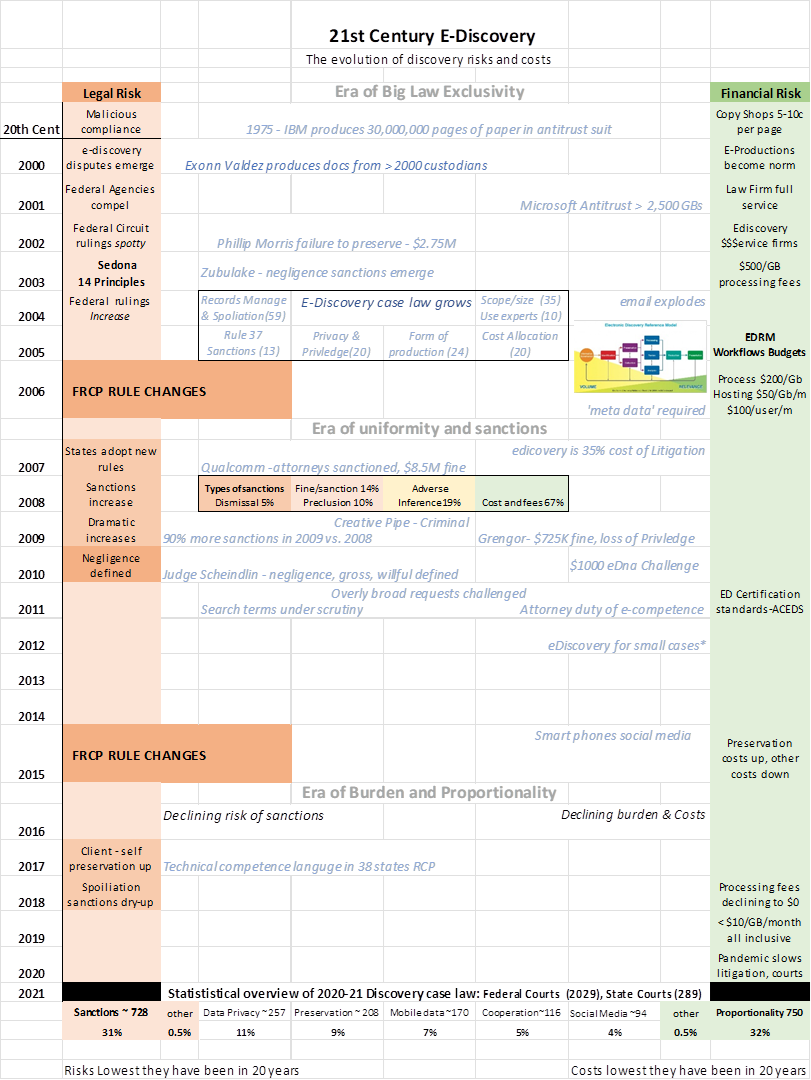 In the 20th century, Discovery obligations were delivered as printed pages for 5-10 cents per page.  Tagging and organization of documents as legal facts were achieved primarily through post-it notes on copies of paper assembled in conference rooms also known as War Rooms.

Enter the 21st century digital age.  By the turn of the century, the explosion in information, email, and electronic documents (ESI) rendered paper discovery untenable.  Technologists turned their attention to dispute resolution processes, workflows, and software.  Most software in the early 2000's were technical point solutions not designed for use by attorneys and paralegals.

In 2002 Digital WarRoom emerged from Preston Gates and Ellis, now KL Gates, to automate and manage eDiscovery.  Our experience with Microsoft European Antitrust and Exxon Valdez litigation discovery obligations drove us towards smarter, cheaper, and more strategy-focused discovery tools.  At that time, processing a single GB of ESI cost $500.  The cost was skyrocketing and sanctions for failure to preserve and produce were emerging.

By 2006, following Sedona Conference recommendations, The FRCP was amended to embrace the requirements of the information age with respect to Discovery obligations.  States soon followed. As the rules were being adopted, prices dropped to one-time processing fees of $200/Gb and hosting fees of $50/GB/month.  eDiscovery was still a luxury enjoyed only by large corporations and AMLAW 50 firms and services were primarily delivered by the non-law firm, full-service vendors.

After the rule changes, educated courts started to enforce rules and obligations.  A body of case law emerged that informed future requirements and started to provide much need clarity on obligations and sanctions.  Even though eDiscovery costs were declining year over year, the explosion in new forms of potentially probative ESI caused ESI preservation and processing volumes to increase faster than costs were dropping.   Clients and law firms struggled to balance discovery costs with legal risks.  Sanctions ballooned and peaking around 2010.  Judge Scheindlin authored the guiding principle wrt sanctions in a landmark case.

By 2012 eDiscovery had become weaponized. Overly broad requests if the face of rising sanctions was tearing at the primary objectives of legal dispute resolution - Just, speedy and inexpensive litigation was in decline.  Non Producing Entities, also known as patent trolls were shaking down whole industries with broad discovery requests that could cost almost as much as the damages being sought.  Large corporations and small corporations alike were capitulating to thin legal challenges.  Legal risk and legal costs could not be easily balanced.    Something had to be done.

Courts, attorneys and even opposing parties started to embrace two new and important concepts: Burden and Proportionality.   By 2015 these concepts, or legal tests, were introduced codified in the FRCP.  Again the states followed.

Since 2016 sanctions have declined dramatically.  Costs have plummeted to between $5-1/GB/month.  DIY eDiscovery technology is being rapidly adopted by Law firms, General Counsel and even municipal entities subject to FOI and Public disclosure rules.   In short, most or all litigators now have clarity on discovery obligations.  They also have access to competitively priced technology platforms for meeting obligations and shaping clients' legal strategies.

The eDiscovery industry has matured and Digital WarRoom welcomes the return of Just Speedy and Inexpensive dispute resolution.

Bill is a seasoned technology commercialization manager, security & forensic consultant, and submarine officer that founded Digital WarRoom in 2002. He is a strong advocate for making e-discovery accessible to everyone and creating publically available educational content. Bill serves as President, CFO and Chief Mentor for the Digital WarRoom family.